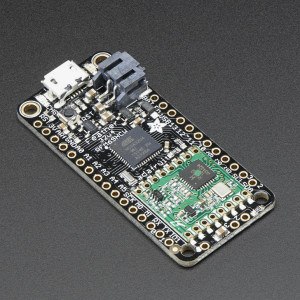 This is the Adafruit Feather 32u4 Radio (RFM69HCW) 900MHz. We call these RadioFruits, our take on an microcontroller packet radio transceiver with built in USB and battery charging. Its an Adafruit Feather 32u4 with a 900 MHz radio module cooked in! Great for making wireless networks that can go further than 2.4GHz 802.15.4 and similar, are more flexible than Bluetooth LE and without the high power requirements of WiFi.

Feather is the new development board from Adafruit, and like its namesake it is thin, light, and lets you fly! We designed Feather to be a new standard for portable microcontroller cores.

This is the 900 MHz radio version, which can be used for either 868MHz or 915MHz transmission/reception — the exact radio frequency is determined when you load the software since it can be tuned around dynamically. We also sell a 433MHz version of the same radio chipsetand if you want much longer range, check out the LoRa 900MHz Feather

The Feather 32u4 Radio uses the extra space left over to add an RFM69HCW 433 or 868/915 MHz radio module. These radios are not good for transmitting audio or video, but they do work quite well for small data packet transmission when you ned more range than 2.4 GHz (BT, BLE, WiFi, ZigBee)

Check out our tutorial for all sorts of details, including pinouts, power management, Arduino IDE setup, antenna options, and more!