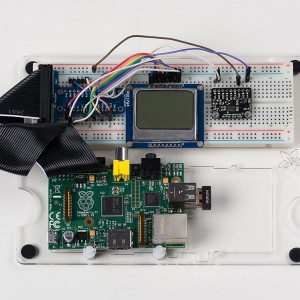 By popular demand! We now have a way to attach a Raspberry Pi computer to a plastic ‘dish’ with a full-sized breadboard. We designed it carefully to make it as easy as possible to attach and detach the Pi. Since the Pi computer does not have any mounting holes, we use these nifty plastic edge ‘grabbers’ — they are incredibly strong but will not damage the Pi circuit board. There are two ways to mount the Pi on to the plate — one if you want to use the HDMI output primarily and one if you plane to use the composite output (they’re on opposite sides of the board so its not possible to have both easily accessable) Next to the Pi is a spot for a full sized breadboard, plenty of space for your project even if you’re using an Adafruit Cobbler breakout helper. We also include 4 rubber bumpers to attach to the bottom

Comes with: Laser cut acrylic plate, mounting hardware for Pi with clips and screws, four bumpers and a clear breadboard. The Pi computer, cables, wires, and any other components shown for demonstration are not included!

What is the Raspberry Pi® ? A low-cost ARM GNU/Linux box.