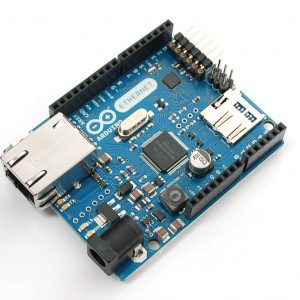 Deep in the Swiss Alps, the top secret Arduino Super-collider has accelerated both anArduino UNO and Arduino Ethernet shield to near-light speeds and smashed them together, resulting in a wholly new Arduino Ethernet! This Arduino has the goodness of Ethernet cooked right in, with an Ethernet jack, network indication lights, and a microSD card holder to store or serve data.

The Arduino Ethernet is the same shape as the normal Arduino Uno, with headers to connect wires or shields. However, the Ethernet jack is a little taller than USB so if you want to plug in a shield, you may need to ‘lift’ it with some stacking headers. Another thing to watch for is this Arduino does not have a USB port on it. Instead, you’ll need an FTDI friend or FTDI cable to program it. There’s a 6-pin connector that the cable plugs right into next to the microSD card holder.

To use and program, connect an FTDI cable to the 6-pin header. Then select Arduino Uno in the IDE. You can also try any of the Ethernet shield examples. Digital pins 10, 11, 12, 13 are used for the Ethernet chip. Pin 4 is used whenever you have a microSD card inserted as well.