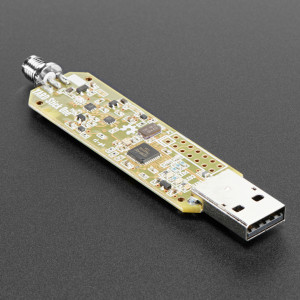 YARD Stick One (Yet Another Radio Dongle) from Great Scott Gadgets can transmit or receive digital wireless signals at frequencies below 1 GHz. It uses the same radio circuit as the popular IM-Me. The radio functions that are possible by customizing IM-Me firmware are now at your fingertips when you attach YARD Stick One to a computer via USB.

Great for listening on RF emitters and transmitting on ISM bands (check your country’s ISM frequencies before transmitting). It’s even better if you are HAM licensed with a wide range of transmitting frequencies!

YARD Stick One comes with RfCat firmware installed, courtesy of atlas. RfCat allows you to control the wireless transceiver from an interactive Python shell or your own program running on your computer. YARD Stick One also has CC Bootloader installed, so you can upgrade RFCat or install your own firmware without any additional programming hardware. An antenna is not included. ANT500 is recommended as a starter antenna for YARD Stick One.

Originally based on the ToorCon 14 Badge design, YARD Stick One has several featured not previously seen in CC1111 platforms: