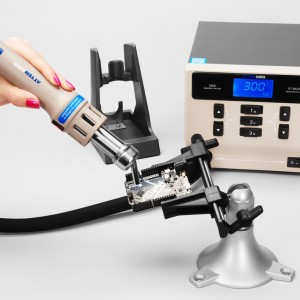 If you’ve ever made a mistake when surface-mount soldering, you’ll know how much of a pain it can be to fix it without the right tools. It can add critical time to a project and can seriously stymie your soldering momentum if you run into a bad component or a faulty reflow. With the ATTEN ST-862D Hot Air Soldering Rework Station, you can easily rework your boards and get your project back on track. It’s also possible to use solder paste (in a syringe for example) to apply paste and then blow hot air over it to melt the solder and get the components into place.

This powerful station has an internal pump and heater to blow a steady stream of temperature-controlled hot air to make it super easy to remove components, fix joints and jumpers, replace missing components, or just correct something you’ve done wrong.

The ST-862D matches up performance with hot air stations that cost three times as much! It’s also a good alternative to the Quick 861 at a lower pric. It’s great for beginners to experts thanks to its super-fast heat-up time and easy-to-use button interface. You can save and restore ‘profiles’ so you have one for lead-free, lead, small chips, or large. Comes with a nice stand and four different nozzles for different sized parts, three of which are angled to make it easier to hold the wand while heating up a zone.

It has a closed-loop temperature control range between 100℃-480℃ (212℉-896℉) and a digital display so you can easily tell what temperature the air’s blowing at. It has a power consumption of 1000W and an intelligent cooling system, so the airflow remains on until it gets to below 100°C. Airflow is 20 — 130L/min, but for most work, you’ll want to keep it at the lower end of than that.

Just make sure to let the rework station heat up all the way before using it and be careful to use tools (and not your hands!) when using as it spits out, well, really hot air. Comes with four nozzles, use the smallest size you can get away with — it helps avoid damaging other components if you are trying to isolate one part of the board while avoiding a connector, for example.