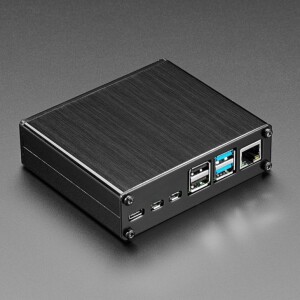 The Pi-Box Pro4 is a rugged industrial enclosure kit for the Raspberry Pi 4. Lincoln Binns designed a smart micro HDMI extender board, so you can access the USB-C power and micro HDMI ports on the same plane as the Ethernet and USB ports.

The rear panel is constructed from 3mm acrylic and opens up communication via Bluetooth and Wi-Fi signals from the Pi 4. Also allows for access to the SD card from the assembled enclosure.

Constructed from solid anodized aluminum, so it’s got serious heft. The body acts as a heatsink for the main chip. We particularly like the extender-doohickey that puts all of the ports on one edge of the enclosure!