You are here: Home > Товары > LPCXpresso LPC1347 Development Board with LPC-Link 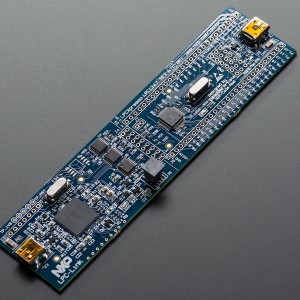 The LPC1347 LPCXpresso board is part of NXP’s LPCXpresso eco-system of low cost development boards based around the free (GCC and Eclipse-based) LPCXpresso IDE. All LPCXpresso boards include an on-board hardware SWD/JTAG debugger, so you don’t need any additional hardware (other than a USB mini-B cable) to start some serious debugging (including setting and stepping through breakpoints, etc.).The LPCXpresso boards are actually two separate boards, and the debugger (called the LPC-Link) can actually be separated from the LPC1347 MCU half, but this is only useful if you plan to use the debugger with other boards inside the LPCXpresso IDE. The MCU side of the board breakout out every pin on the LPC1347, and is actually a really nice dev board because it’s so minimal! You can do what you want with the MCU, without all kinds of conflicts, and it comes in a pretty breadboard friendly size.

This LPCXpresso is for the LPC1347

Looking for an affordable general-purpose, USB-enabled MCU that packs a lot of punch in a small package? The LPC1347 is an excellent choice with a highly efficient ARM Cortex-M3 core at up to 72MHz, 64KB flash and 12KB SRAM. What makes it stand out in the crowd of small M3 MCUs? It has built in ROM-based USB drivers that make it relatively easy to implement USB, but more importantly it includes a super-handy USB bootloader that makes the device appear as a USB Mass Storage device with 64KB flash. To update your firmware, just drag and drop your binaries files onto the flash drive, reset, and voila … your device is programmed! No extra HW, no special software, and no worries about being able to de-brick your device in the future!

In traditional Adafruit fashion, though, we wouldn’t just throw something fun at you and say ‘have at it!’. KTOWN has put together a completely open source code base for the LPC1347 (and it’s Cortex M0-based cousins the LPC11U24 and LPC11U37) that makes it easy to get started with this board and MCU from the command-line (using a Makefile), or with several modern IDEs (NXP’s free LPCXpresso IDE, Rowley Associates Crossworks for ARM, The free cross-platform CodeLite IDE, as well as experimental project files for Keil). The code base also includes drivers for a lot of popular Adafruit sensors, like the ADXL345, the BMP085, some OLED and graphic displays, and lot of other goodies!

If you’re new to ARM, and need a bit of hand-holding to get started, this is probably the board you want to pick up: its got that nice built in USB boot-loader, lots of example code, GCC support and a debugger built in.