You are here: Home > Товары > LPCXpresso LPC1769 Development Board with LPC-Link 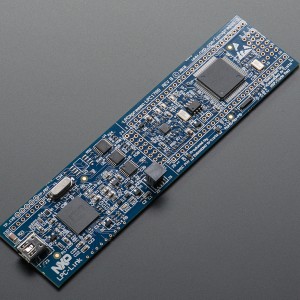 If you want a fast, modern MCU that has just about everything covered for you, the ARM Cortex-M3 based LPC1769 is a pretty reliable choice!

With a modern, highly efficient Cortex-M3 core, the LPC1769 packs a lot of punch (single cycle 32-bit multiply, etc.), and has all the peripherals you’re likely to need to get just about any sensor hooked up to it, get some motors whirling, and have it talking to the outside world via USB, Ethernet, CAN or UART.

While the LPC1769 doesn’t have the super-handy USB bootloader found on it’s newer, smaller cousin the LPC1347, it does still have a UART-based bootloader built into the ROM memory, so it’s almost impossible to brick the MCU.

The LPCXpresso board includes an on-board SWD/JTAG debugger than can be used to debug your LPC1769 project in NXP’s free LPCXpresso IDE (free for up to 128KB), but you can also debug the board with any other SWD or JTAG debugger using the optional SWD connector, or program the boards via the free Flash Magic tool or an open source utility like lpc2isp.

The LPC1769 isn’t the most beginner friendly devices out there, but for those of us who have microcontroller experience and want to step it up, they are an excellent introduction to proper embedded design and development. Given the popularity of these chips there are quite a few resources out there for them, such as ports of popular open source RTOSes like FreeRTOS, and stacks like LWIP or uIP.

Best of all, this is the same MCU that’s used on most of the mbed boards out there, and the mbed source code has recently been republished under an open source license, so you have a large pool of proven, well-thought-out code to take advantage of trying to build something amazing with this kitchen-sink of an MCU!