You are here: Home > Товары > Makers: The New Industrial Revolution by Chris Anderson 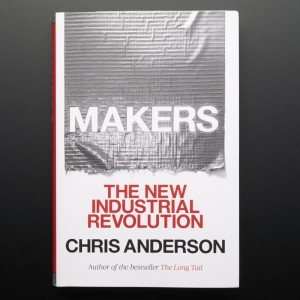 Every country, to remain economically strong, must make physical products if it doesn’t want to become a nation of burger flippers and checkout clerks. Yet in America and Europe, it has become harder and harder to sustain manufacturing as entire industries, from clothing to electronics, have shifted their factories to Asia and other low-cost regions. In the United States, manufacturing employment as a percentage of total working population is at a century-long low.

The solution, Anderson says, is in a desktop manufacturing revolution that will change the world as much as the personal computer did. The tools of factory production, from digital fabrication to online factory services, are now available to everyone; garage start-ups can make products in batches as small as a single unit or as large as tens of thousands. Anyone with an idea can set assembly lines into motion with little more than a keystroke.

Moreover, thanks to crowdfunding and social financing at companies like Kickstarter and Quirky, entrepreneurs are no longer dependent on venture capitalists or investment banks to finance their ideas. And with the global reach of the Internet, entrepreneurs are able to sell their products to consumers at home and around the world instantly, while start-ups like Etsy create new platforms and markets to bring buyers and sellers together.

Just as the Web ended the monopoly of mass media, so it is now ending the monopoly of mass manufacturing. Over the next ten years, Anderson explains, countless micro-manufacturers, based on open-source design and DIY manufacturing, will help drive the next big movement in the global economy as the power of bytes—the Long Tail—is transformed into the power to make things again, the Long Tail of things.

CHRIS ANDERSON is the editor in chief of Wired, which he has led to multiple National Magazine Award nominations, as well as winning the prestigious top prize for General Excellence in 2005, 2007, and 2009. In 2009, the magazine was named Magazine of the Decade by the editors of AdWeek. He is the co-founder of 3D Robotics, a fast-growing manufacturer of aerial robots, and DIY Drones. Anderson is the author of the New York Times bestseller The Long Tail and Free: The Future of a Radical Price. He lives in the San Francisco Bay Area.