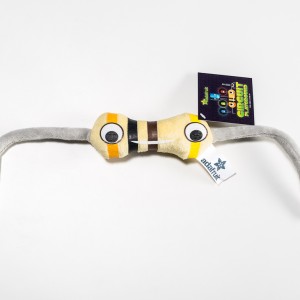 Mho has a laid back, passive personality. He likes to do as little work as possible, and prefers to simply let the world happen around him. Mho is kind of a hippy, and is very quiet and gentle. He is best friends with Ruby, the red LED, who shares his idealism, though he’s often reluctant to go off with her on her adventures because he thinks they will probably end up in trouble. Mho has sort of a nasally, hippie voice (California accent, but not a surfer). His catch phrase is «no worries, man. it’s all easy.»About Resistors:
Resistors are passive electrical devices that resist the flow of an electrical current. The voltage across and the current through a resistor are related by Ohm’s law. Unlike capacitors and inductors, the resistance of a resistor does not change with its frequency. The amount a resistor constricts the flow of a current is its resistance. ‘Thru-hole’ resistors are labeled by their resistance using a color band scheme.