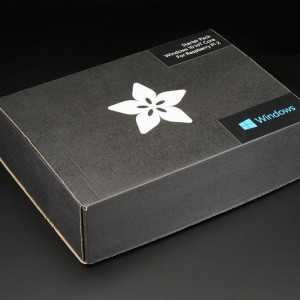 The Microsoft Internet of Things Pack for Raspberry Pi 2 is the best way to get started using Windows 10 and your Raspberry Pi as an IoT enabled device.

A collaboration between Microsoft’s IoT division and Adafruit, this pack’s the best way to get started using both Windows 10 on your Pi and to start doing some popular projects with the internet of things.

Check out windowsondevices.com for more information on how to set up Windows 10 on your Raspberry Pi!

As of December 22nd, 2015 this pack now comes with the November, 10th 2015 updated release of Windows 10 for Raspberry Pi.  Click here to learn more about the update.

Here’s a good introduction to the Pi 2 and a few more learn guides that are worth checking out to start.  While they’re for the Model B, they will all apply to the Raspberry Pi Model B+ and the Raspberry Pi 2.