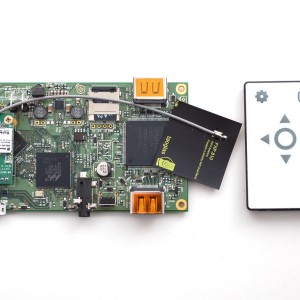 Get your NeTV on with this full pack that includes everything you need to start!This complete kit contains:

NeTV is the first offering from the brand new Sutajio Ko-Usagi, the Open Source Hardware company led by «bunnie» Huang. bunnie is best known as the author of «Hacking the XBox» and was the lead hardware engineer of the chumby internet alarm clock. So, it is no surprise that his latest invention, conceived in chumby industries’ Singapore office and brought to you by Sutajio Ko-Usagi, is a fully open source HDTV peripheral which brings WiFi Internet and Android mobile interfacing to any HDMI TV!

NeTV is available here in bare board form with an optional DIY plastics kit! This package does not have the enclosure fully assembled with the PCB, you will have to snap the NeTV into its case, a 5-10 minute task. This package contains the NeTV assembled and tested board, IR remote (to control the NeTV from your couch), a Micro-USB cable (to connect/power the NeTV), a 5V 1A USB power supply (to power the board), and an HDMI cable (to connect it to the HDTV)

NeTV enables overlaying your web content on existing HDMI video feeds, such as those from a BluRay player or cable box. Inside, it’s an Angstrom linux box running Webkit that features chroma-key video compositing. Out of the box, the reference firmware enables the overlay of Facebook and Twitter feeds, and SMSes from Android phones. The UI is written in Javascript/HTML, making it easy and fast to develop your custom application.

The system also features a convenient HTTP API which uses POST commands to issue events to the screen and control device behavior. This, combined with zeroconf discoverability via Bonjour, makes integrating NeTV with other networked devices (such as your smartphone or laptop) a snap.

FPGA geeks take note! NeTV does video compositing with an FPGA. The FPGA is managed using a convenient set of built-in command-line tools. You can modify the NeTV’s video processing capability using Xilinx’s free Webkit development environment. Or, you can repurpose the FPGA for entirely new functionality; the sky’s the limit!