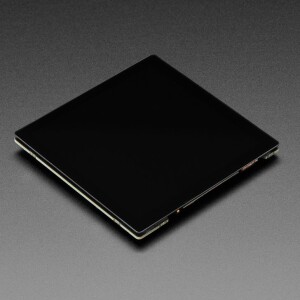 It’s hip to be square with the Pimoroni’s HyperPixel 4.0 Square Display with Capacitive Touch for Raspberry Pi computers. This display has all the great features of their standard HyperPixel 4.0—a crisp, brilliant IPS display, capacitive touchscreen, and high-speed DPI interface—it’s just more square!

This square version of HyperPixel 4.0 is great for custom interfaces and control panels, and works really well for Pico-8 games. Everything is pre-soldered and ready to go, just pop it onto your Pi, run the installer, and away you go!

We also have a less expensive version without capacitive touch

HyperPixel 4.0 Square uses a high-speed DPI interface, allowing it to shift 5x more pixel data than the usual SPI interface that these small Pi displays normally use. It has a 60 FPS frame rate and a resolution of approximately 254 pixels per inch (720x720px) on its 4.0″ display. The display can show 18-bits of color (262,144 colors).

The touchscreen variant is capacitive touch, that’s more sensitive and responsive to touch than a resistive touch display, and it’s capable of multi-touch!

Please note: when installing HyperPixel 4.0 Square onto your Pi make sure not to press down on the screen surface! Hold the board by its edges and wiggle it to mate with the extended header (or GPIO header).  Also take care not to pull on the edges of the glass display when removing your HyperPixel.

It’ll work with any 40-pin version of the Pi, Pi 4, Pi 3 including Pi Zero and Pi Zero W. If you’re using it with a larger Pi then use the extra 40-pin header that’s included to boost it up to the required height. If you’re using a Pi Zero or Pi Zero W then just pop it straight onto the GPIO.