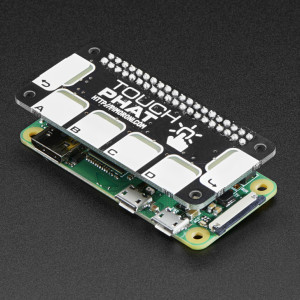 The Pimoroni Touch pHAT has six capacitive touch buttons, each with a bright white LED, so you can add a touch interface to your Raspberry Pi. While it is shaped and sized to match a Pi Zero, it works great with any Pi with 2×20 connector. You can even use a dry erase pen to write on the pads to label their function.

The pHAT features a CAP1166 capacitive touch and LED driver chip that is read over I2C. Each pad has a matching LED that can be controlled independently. The LEDs have been under-mounted and shine through exposed sections of the PCB to give a pleasing yellow-green glow and a completely smooth top surface!

Kit includes: Touch pHAT PCB & 2×20 0.1″ female GPIO header. Some light soldering is required to attach the header on, or you can of course solder the pHAT right onto the Pi Zero.

Pimoroni’s handy one-line installer will install the Touch pHAT Python library for you. They’ve included a couple of examples too, to show off what you can do with Touch pHAT.