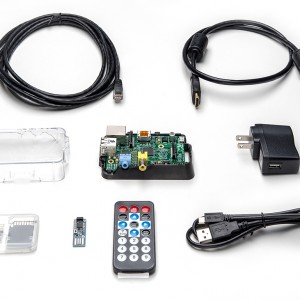 Build your own all-in-one mini XBMC computer with this Raspberry Pi RaspBMC pack! You get everything necessary to start, plug it in and rock out with your very own open source set-top box. Watch videos, install apps, follow RSS feeds, etc.To make this pack extra-fun we not only have the Pi and required accessories but also include an Adafruit IRKey and IR remote. Plug the IRKey into the Pi USB port to control RaspBMC from your couch without the need for a keyboard. (Although, if you’re going to be doing heavy typing, you may want to pick up a wireless USB keyboard + touchpad.)Each order comes with: