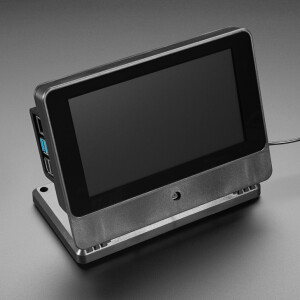 Here is an updated, excellently designed stand that provides a sleek and sturdy look for the 7″ Touchscreen Display and Raspberry Pi. Say hello to the improved SmartiPi Touch Pro!

This enclosure creates an all-in-one Raspberry Pi computer with a single USB-C port or microUSB port in the back to power the components in the case. The Raspberry Pi is mounted behind the display and the ports are flush with the edge of the display.  There’s even a fan included for keeping your Pi cool.

An included port blocking part for Pi 3 or 4 allows you to only allow access to the ports that you want exposed. There is also a second set of threaded inserts to mount your own development board or another piece of hardware. Perfect for an industrial or commercial application where you want to add your own development board to the case. The case is made out of injection-molded ABS plastic, so it can be drilled or machined for additional customization.

The 7″ Display is secured into the case with four screws, and your Raspberry Pi is enclosed in a compartment on the back of the case. A simple door covers the Pi in the compartment allowing for the display ribbon cable to connect to the Raspberry Pi DSI port.