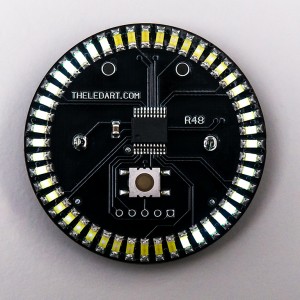 Akimitsu «The LED Artist» Sadoi is a local New York artist who designs and makes beautiful LED art. We’re excited to carry his lovely new wearable designs. The R48 is a wearable LED ring, a little less than 2″ diameter, that has 48 white SMD LEDs that animate and sparkle. Comes fully assembled and with a non-rechargeable CR2450 coin cell.
Comes with all white LEDs
Each R48 is fully assembled, and comes with a non-rechargeable battery (CR2450, easily replaceable).
Battery will typically last about 5 hours continuously.
Also comes with black cord (lanyard) to hang R48 around your neck.
25 beautiful animation patterns preprogrammed.
Demo mode automatically runs though all animation patterns – changes every minute. (Activated by holding the button at the startup.)
Rechargeable battery (LIR2450) is also available as an option. This recommended option lights the LEDs brighter, as it has higher voltage.
The charger for the above is also available.
Dimension: 1.9 inch diameter, 0.4 inch thick (including the battery)
The videos below show the R48 in blue — the white looks just as good!