You are here: Home > Товары > TinyPICO ESP32 Development Board with USB-C 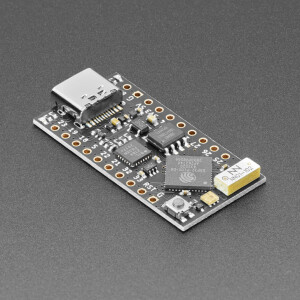 TinyPICO ESP32 Development Board with USB-C

TinyPICO is the world’s smallest, fully-featured ESP32 development board, designed to unlock the power of the ESP32’s dual-core 240MHz and internet connectivity, in a package smaller than your thumb!

Please: This is the USB-C version of the TinyPICO V2. TinyPICO V1 is still available over here!

The developers behind UnexpectedMaker have filled every nook on this board, packing a massive 700mA 3.3V regulator, on-board battery management, an RGB LED, 4MB of extra PSRAM, and 14 GPIO!

TinyPICO includes an onboard APA102 RGB LED that has a quiescent current of 1 mA. Thankfully there is a solution for deep sleep. GPIO13 controls the power to the APA102 using a P-Channel MOSFET via a high-side switch that can (along with smoother IO settings) shut down the power to the APA102 for you. It’s essential to do this before going into deep sleep to ensure the lowest current draw possible.

UM have created some helper functions for you in their TinyPICO MicroPython & Arduino helper libraries to make this easy. Please check the code in the platform you use to understand how to shut down the APA102 correctly as just pulling GPIO13 high is not enough.