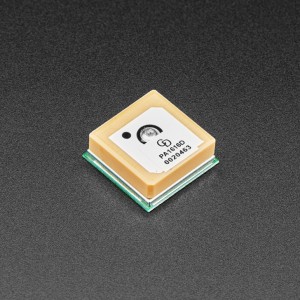 For those who want to integrate our awesome Ultimate GPS module into their own projects, we now have the raw sub-module available. Don’t be fooled by its small size, this is a very sensitive, high-quality GPS module with all the extras you could want and more at under 6 grams!

As of August 2021, the original «Ultimate GPS» module we used was discontinued by the vendor. We found  and are using a nearly-identical version of the module — it’s a little taller (4mm) but has the same functionality. The commands for querying the antenna have changed slightly so existing projects may need to update their firmware.

It’s got everything you want and more:

The breakout is built around the MTK3333 chipset, a no-nonsense, high-quality GNSS module that can track up to 33 satellites on 99 channels, has an excellent high-sensitivity receiver (-165 dBm tracking!), and a built in antenna. It can do up to 10 location updates a second for high speed, high sensitivity logging, or tracking. Power usage is incredibly low, only ~29 mA during navigation.

Two features that really stand out about the MTK3333-based module are the external antenna functionality and the built-in data-logging capability. The module has a standard ceramic patch antenna that gives it -165 dBm sensitivity, but when you want to have a bigger antenna, you can snap on any 3V active GPS antenna via the uFL connector. The module will automatically detect the active antenna and switch over! Most GPS antennas use SMA connectors so you may want to pick up one of our uFL to SMA adapters.

This item is just the GPS module itself, no breakout board or other components included. The module can be soldered by hand without too much difficulty, we have it in our Eagle Library (GPS_FGPMMOPA6H) to make it easy to use. If you’re interested in getting started fast, check out our Ultimate GPS breakout board which comes all assembled and tested.

We have a nice fancy library for GPS usage for both Arduino and Python usage. A full tutorial is also available, which has tons of information about the module, how to use the data logger, example code for both CircuitPython & Arduino, and more.